Cloud Platforms for .NET Developers – My Talk at DevReach 2012 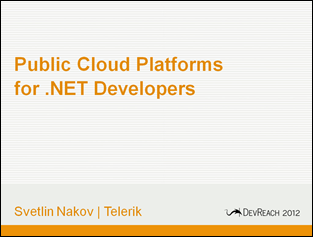 I was invited to give a talk at DevReach 2012 – the largest developer conference in South-Eastern Europe. DevReach 2012 will host 60+ sessions in 6 parallel tracks (Web, Mobile, Cloud, Architecture, Agile and Testing) in 2 days. It will be held in Sofia (4-5 October) and is organized by Telerik and Martin Kulov.

In the last year I got solid experience about cloud development, public cloud platforms, cloud database, storage and other cloud services. I organized a practical cloud development course at Telerik Academy last year. I teach C# and JavaScript and I focus on .NET and HTML5 platforms, so I am notably interested in .NET clouds. I have researched many clouds that claim to provide .NET cloud platform but most of them do not really provide .NET PaaS solution, but just IaaS cloud hosting, which is different. My lecture and demonstration will be about the public .NET PaaS platforms: “Public Cloud Platforms for .NET Developers”.

Public clouds platforms are rapidly growing and many businesses move partially or fully their IT infrastructure to the cloud. The big players like Microsoft, Google, Oracle and Amazon operate their own public cloud platforms while the smaller players provide cloud services and PaaS platforms and on top of the larger. What about the .NET developers and the cloud?

In this talk the speaker will introduce the public .NET clouds and will compare the leading .NET PaaS clouds: Windows Azure, AppHarbor, Uhuru and AWS Elastic Beanstalk for .NET. The .NET public clouds will be compared in terms of architecture, programming model, pricing, development stack, available services, deployment model and tools for administration and monitoring. A live demo will show how to deploy and run a typical .NET application (based on ASP.NET MVC and MS SQL Server) in AppHarbor and Uhuru.

I will not show a demo about Amazon AWS and Beanstalk for .NET as well as about Azure. Azure and AWS will be well covered at DevReach 2012 and it will be more practical to demonstrate the other .NET cloud platforms: AppHarbor and Uhuru. In fact most public clouds like Heroku, Engineyard, OpenShift and CloudBees, Oracle and VMware do not support .NET as a development and deployment stack. You have two options: use IaaS and handle the entire architecture and deployment yourself or use some of the four main players at the .NET public cloud market (as of September 2012):

For all DevReach 2012 speakers I provide my fixed version of the PowerPoint (PPTX) template (with my presentation included in it):

The improvements over the original DevReach PPTX template are:

4 Responses to “Cloud Platforms for .NET Developers – My Talk at DevReach 2012”