On 24 April 2010 I was invited along with my colleague Mihail Stoynov as speakers at a half-day seminar on Java 7. In 3 sequential sessions we presented in deep details what is coming with the new release of the Java platform – Java 7, which is expected to be released in the end of 2010. 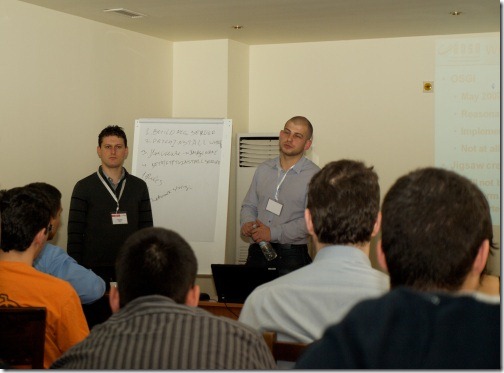 The event was part of the spring conference of the Bulgarian Oracle User Group (BGOUG), as part of its new initiative towards growing the Java community. The BGOUG is old and mature community organization that organizes conferences, seminars and Oracle community events for more than 10 years, strongly supported by Oracle Corp. but independent entity. There were about 200 people at the seminar which was held from 23 to 25 April 2010 in the city of Plovdiv.

Our Java 7 talk was about 60 software engineering professionals. It was exciting seminar with great interest of all attendees (nobody left the talk even after the third hour). The new language changes and technologies were interesting to the auditory and there was a discussion on some of the topics.

To be honest my colleague Mihail prepared most of the presentation materials and demonstrations. I was talking about the dynamic languages in JVM, the new invokedynamic bytecode instruction, method handles and dynamic invocations. There was attractive demo which shows how to dynamically invoke a method which is not known at compile time. I also prepared an interesting talk about the closure in Java, the lambda calculus, lambda expressions, lambda functions, first class functions, functional programming, extension methods and parallel processing that are expected to come with Java 7. It is really nice to see how dramatically the everyday collections processing will be changed. For example with a simple single line of code we will be able to extract the names of a list of persons that match some predicate (inline Boolean condition, e.g. firstName == ”Peter”) and arrange them in alphabetical order.

The demonstrations were based on the early access preview version of JDK 7 – Java SE 1.7.0-ea-b89 and NetBeans 6.9 beta that supports almost all of the features implemented b89. All features that were implemented in b89 were demonstrated. The others left just on the slides but the concepts were made clear by the presenters.